In fewer than 100 days, Jacksonville Jaguars will return … at least as things stand today.

While there is still some uncertainty surrounding the start of the NFL season, the league office has made it clear that they are planning to kick the season off on Sept. 10 and then have every other team play on Sept. 13.

By going off that timeline, we are now just 90 days from watching the Jaguars take the field against the Indianapolis Colts for the first regular season game of 2020.

In an effort to countdown to the start of the season, we will now be going from 95 through 1 to determine the best players to don the teal, black, and white for the Jaguars at each specific number. Yesterday, we tabbed Yannick Ngakoue as the best to wear No. 91 in Jacksonville, but what about the next number?

So when considering each player has worn the No. 90 since Jacksonville’s first season in 1995, who has been the most impactful? Since the team’s inception, here are the players who have worn the jersey number:

There aren’t many players who spent multiple years for the Jaguars while wearing No. 90 so the options here are relatively slim pickings outside of one obvious name. So, how do all of the No. 90s in Jaguars history stack up?

While Andre Branch never lived up to his status as the No. 38 overall pick in the 2012 NFL Draft, he still made more plays for Jacksonville and its defense than many other players on this list. The long-limbed Branch lacked the quickness and flexibility around the edge to be a consistent sack artist, but he was able to produce for the Jaguars for four seasons.

In four years in Jacksonville, Branch played in 51 games and started 13. During that span, he recorded 91 tackles, 14 sacks, 16 tackles for loss, 21 quarterback hits, five forced fumbles, three fumble recoveries, and 11 pass deflections. Branch’s single-season high in sacks in Jacksonville was the six he recorded in 2013, though he didn’t record more than four in any other season. While he may not have made the impact on the defense that the franchise hoped he would, he is more deserving of a spot on this list than some others.

Malik Jackson spent just three seasons in Jacksonville and only that first year in 2016 featured him wearing No. 90, while his best year as a Jaguar came in 2017 when he was wearing No. 97. But in his lone season as Jacksonville’s No. 90, Jackson made his fair share of plays and helped the Jaguars feel vindicated for inking him to a massive contract in free agency.

In 16 games/starts in 2016, Jackson recorded 33 tackles, 6.5 sacks, 11 tackles for loss, 19 quarterback hits, and one fumble recovery. He would go on to earn a Pro Bowl nod in 2017 after recording eight sacks and four forced fumbles, but he was Jacksonville’s best overall defender from snap to snap in 2016 and deserves some recognition for his performance in what was otherwise a poor season for the Jaguars.

There was no way that Tony Brackens wasn’t going to earn the top spot on this list. In Jacksonville’s 25-year history as a franchise, no player has gotten to opposing quarterbacks nearly as frequently as Brackens did throughout his career, with Bracken holding the team’s sack record at 55, which is 18.5 more than the next closest player (Yannick Ngakoue).

In eight years in Jacksonville, Brackens played in 107 regular season games (starting 75) and seven playoff games. During that span, the veteran defensive end recorded 55 sacks, 362 tackles, 53 tackles for loss, 27 forced fumbles, 13 fumble recoveries, and five interceptions. Creating game-changing plays was Brackens’ calling card, with him forcing five fumbles in two separate seasons and a jaw-dropping eight forced fumbles in 1999, the same season he recorded 12 sacks and earned a trip to the Pro Bowl.

The Jacksonville Jaguars have revealed plans that would allow a limited number of fans to attend 2020 home games, filling TIAA Bank Field to around a quarter of its 67,000 capacity. The organisation also unveiled new safety protocols for staff and fans, including mandatory use of face coverings amid the coronavirus pandemic. The Jaguars said the plan was designed “in compliance […] 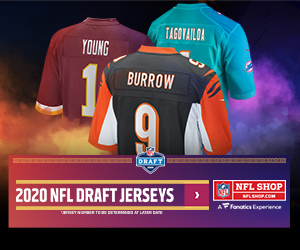